What is Thunderbolt 4? | Trusted Reviews


Apple’s Spring Loaded event is taking place on April 20 this year and we’re hoping Thunderbolt 4 will receive a mention during the day’s announcements.

While Apple has remained hush about the products it plans to unveil at the event, one of the biggest devices we expect to see make an appearance is the iPad Pro 2021.

Last month, Bloomberg reported that Apple’s priciest tablet line will receive a refresh this year, with updates including a faster processor, better camera, a Mini-LED display – and Thunderbolt 4 connectivity.

The port was introduced to Apple’s product line alongside the M1 chip on the company’s new Apple Silicon-powered MacBook Air and MacBook Pro, but has yet to be added to its iPad range.

But, what is Thunderbolt 4? Read on to find out all about the next-generation of connectivity and why we want to see it on the iPad Pro this year.

Thunderbolt 4 is a next-generation connectivity solution designed to replace Thunderbolt 3 in supported devices.

The universal technology was introduced alongside Intel’s Tiger Lake mobile processors last year and can already be found on a number of laptops.

It allows users to transfer data, output a display and charge their device all through the same USB-C port as Thunderbolt 3, albeit with a unique label to differentiate it from the previous standard.

While Thunderbolt 4 isn’t actually faster than Thunderbolt 3 (both versions of Thunderbolt transfer data at a maximum of 40 Gb/s data) there are a number of benefits to Thunderbolt 4 over the older standard of connectivity. 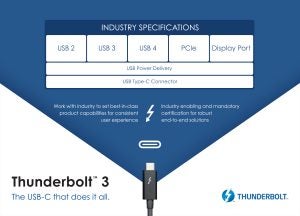 Thunderbolt 4 can support up to two 4K displays at the same time, doubling the number of 4K screens Thunderbolt 3 could handle. The latest version of Thunderbolt can also support an 8K display, which is good news for those in need of a standard that can support a higher resolution display.

Thunderbolt 4 is required to support PCIe bandwidth speeds of 32Gbps, meaning we could see data transfer speeds increase with SSDs.

The newest version of Thunderbolt also supports accessories with up to four Thunderbolt 4 ports instead of the previous cap of two, and universal cables can be up to two metres long.

Intel has stated that Thunderbolt 4 must provide 100W power for laptop charging, meaning you shouldn’t be stuck carrying multiple power cables. Laptops connected to a Thunderbolt dock can also be woken up by touching the mouse or keyboard now, removing an issue we saw with Thunderbolt 3.

For more on laptops, make sure to check out our guides to the best laptops, the best student laptops and the best ultrabooks.