SmartNews’ Vaccine Alert and Map features for its Japanese app

SmartNews announced today that its tools to help Japanese users find nearby COVID-19 vaccine bookings have reached more than one million users just a week after launching. The news discovery unicorn decided to create Vaccine Alert and Map features for its Japanese app because many people there are frustrated by the speed of vaccine rollouts. In the United States, where vaccinations are going much faster, SmartNews just released a feature that lets people find appointments by zip code today.

The company has more than 20 million monthly active users combined in Japan and the United States.

According to a public opinion poll by Nippon TV, more than 70% of Japanese people are dissatisfied with its slow vaccine rollout. That sentiment was echoed in SmartNews’ own research, which surveyed 900 people aged 65 to 79 at the beginning of April, and found that more than 90% felt there was insufficient information available about when and where they could get vaccinated. Challenges included the lack of a central portal for vaccine booking information, meaning local government offices and healthcare providers were inundated with questions. 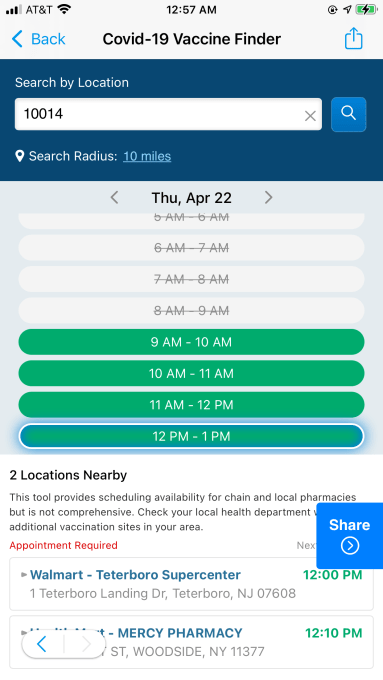 To create its Vaccine Alert and Map, SmartNews aggregated information from 1,741 municipalities across Japan. The Vaccine Alert lets users know when they are eligible to get a shot based on their location, age, occupation and health conditions. The Vaccine Map combines data from about 37,000 facilities, so people can see where bookings are available near them or get notified when their healthcare providers begin taking reservations.

The features were released on April 12, the day vaccinations began for elderly people in Japan, and had more than one million users a week later. This is in part because SmartNews is one of the country’s most popular news aggregator apps and also because the new features were covered by TV Asahi, a major TV station.

A company representative told TechCrunch that many people who signed up for the vaccine features were already SmartNews users, but it has also seen new downloads as people share their vaccination appointments with friends and family.

'Alexa, should I get a mullet?' Amazon opens AR-powered London hair salon