The last year wasn’t an easy one for just about anybody, but a new report from Project Include shows that the shift to remote work affected some groups more negatively than others. Unsurprisingly, it was people already struggling against harassment and bias, particularly women of color and those identifying as LGBTQ, who saw the biggest jumps in those behaviors.

The report is based on a survey of about 2,800 people and interviews with tech workers and subject matter experts in numerous countries and industries. There’s not a lot of good news in it, but why should there be? Sadly, the unprecedented confluence of multiple disasters in 2020 has spawned another, quieter disaster in working conditions.

Remote work has changed how people interact, and the result of that has been, among other things, significant increases to gender- and race-based harassment. Over a quarter of those surveyed reported an increase in harassment and workplace hostility — and of those experiencing increases, 98 percent were women or nonbinary and 99 percent were non-white.

Trans people were much more likely to experience harassment and hostility, as were were all black respondents, especially women and nonbinary people. Asian, Latinx, and multiracial respondents also reported more. 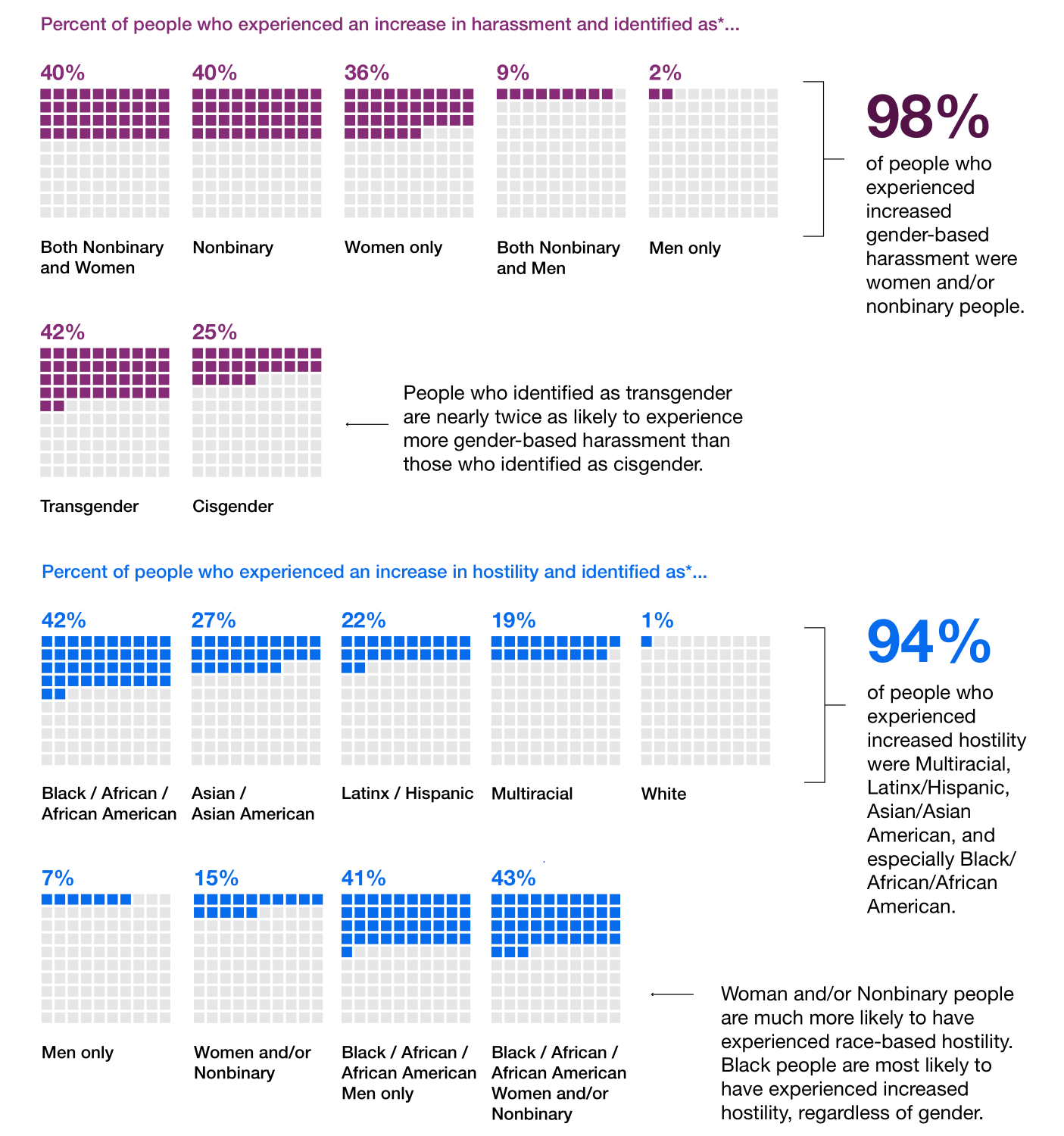 The switch to remote productivity and communication seems to have made this harassment difficult to avoid. An increase in reliance on 1:1 communication via chat, email, and video calls meant working directly with harassers was inescapable and difficult to report. “Respondents noted that individual harassers would follow them across online spaces to where they were,” the report adds.

People with mental health conditions, particularly those with PTSD, were twice as likely to report experiencing harassment than those without.

Changes to expectations and tools meant big increases to anxiety and drops in work-life balance. Nearly two thirds of respondents reported being expected to work longer days, and more than half said they felt pressure (or were plainly expected) to be online outside of official working hours. 10 percent said managers were checking in daily, and 5 percent reported two or more times per day. Others complained about surveillance software like keystroke and screen monitoring.

Workers with disabilities found that companies often chose productivity and collaboration tools that had inadequate accessibility features — for example, Zoom calls without automatic captioning that required lip-reading to keep up.

As for reporting harassment, most said they did not do so because they didn’t trust their HR department or company at large to handle the complaints properly or respond fairly. One person even reported that it was a person within HR itself that was harassing them. Less than half of respondents said they trusted their company to respond to these issues properly; about a third said they did not trust the company to do so; about the same number said their workplace doesn’t even have the tools to intervene or solve any issue they might bring up.

These and more statistics are available in the report, which goes into detail on a number of other issues and behaviors, as well as making a number of suggestions as to what companies can do to step up. Of course if your company has waited until now to take action, that’s a problem right there. But in general the idea is to actually listen to workers, hold leadership accountable, and take actions with measurable impact like no-meeting days and generous time-off policies.

Most of all, don’t expect things to just “go back to normal.” CEO of Vaya Consulting Nicole Sanchez puts it best as quoted in the report:

Most companies are not ready to bring people back together physically, even electively. People at the executive level are going to be shocked to find out that what they’re actually dealing with is a whole lot of live active trauma. A lot of companies that go back and try and make it like it was before will wonder, ‘why aren’t these pieces fitting together anymore?’ And the answer, I hope, that we get collective agreement on is: Those pieces never fit together. They just fit together for you. Now, you’re seeing all the seams and all of the vulnerabilities, and now you have to reinvent your company.

The authors of the report include Ellen Pao of Project Include itself, Yang Hong of Shoshin Insights, and Caroline Sinders of Convocation Design + Research.