Orca wants to give boating navigation its ‘iPhone moment’ – TechCrunch


Boating is a hobby steeped in history and tradition — and so is the industry and those that support it. With worldwide connectivity, electric boats, and other technological changes dragging the sector out of old habits, Orca aims to replace the outdated interfaces by which people navigate with a hardware-software combo as slick as any other modern consumer tech.

If you’re a boater, and I know at least some of you are, you’re probably familiar with two different ways of chart-plotting, or tracking your location and route: the one attached to your boat and the one in your pocket.

The one on your boat is clunky and old-fashioned, like the GPS interface on a years-old budget sedan. The one in your pocket is better and faster — but the phone isn’t exactly seaworthy and the app drains your battery with a quickness.

Orca is a Norwegian startup from veterans of the boating and chart-plotters that leapfrogs existing products with a built-from-scratch modern interface.

“The industry hasn’t changed in the last 20 years — you have three players who own 80 percent of the business,” said co-founder and CEO Jorge Sevillano. “For them, it’s very hard to think of how software creates value. All these devices are built on a user interface that’s 10-15 years old; think about a Tomtom, lots of menus, lots of clicks. This business hasn’t had its iPhone moment, where it had to rethink its entire design. So we thought: let’s start with a blank slate and build a new experience.”

CTO and co-founder Kristian Fallro started working on something like this years ago, and his company was acquired by Navico, one of the big players Sevillano refers to. But they didn’t seem to want to move forward with the ideas, and so he and the others formed Orca to pursue them. Their first complete product opened up for pre-orders this week.

“The challenge up until now has been that you need a combination of hardware and software, so the barrier to entry was very, very high,” Fallro explained. “It’s a very protected industry — and it’s too small for Apple and Google and the big boys.”

But now with a combination of the right hardware and a totally rebuilt software stack, they think they can steal a march on the dominant companies and be ready for the inevitable new generation of boaters who can’t stand to use the old tech any more. Shuttling an SD card to and from the in-boat system and your computer to update charts? Inputting destinations via directional pad? Using a separate mobile app to check weather and tides that might bear on your route? Not exactly cutting edge.

The Orca system comprises a ruggedized industrial tablet sourced from Samsung, an off the shelf marine quality mounting arm, a custom-designed interface for quick attachment and charging, and a computing base unit that connects to the boat’s own sensors like sonar and GPS over the NMEA 2000 protocol. It’s all made to be as good or better than anything you’d find on a boat today.

So far, so similar to many solutions out there. But Orca has rebuilt everything from the ground up as a modern mobile app with all the conveniences and connections you’d expect. Routing is instantaneous and accurate, on maps that are clear and readable as those on Google and Apple Maps but clearly still of the nautical variety. Weather and tide reports are integrated, as is marine traffic. It all runs on Android or iOS, so you can also use your phone, send routes or places of interest to the main unit, and vice versa. 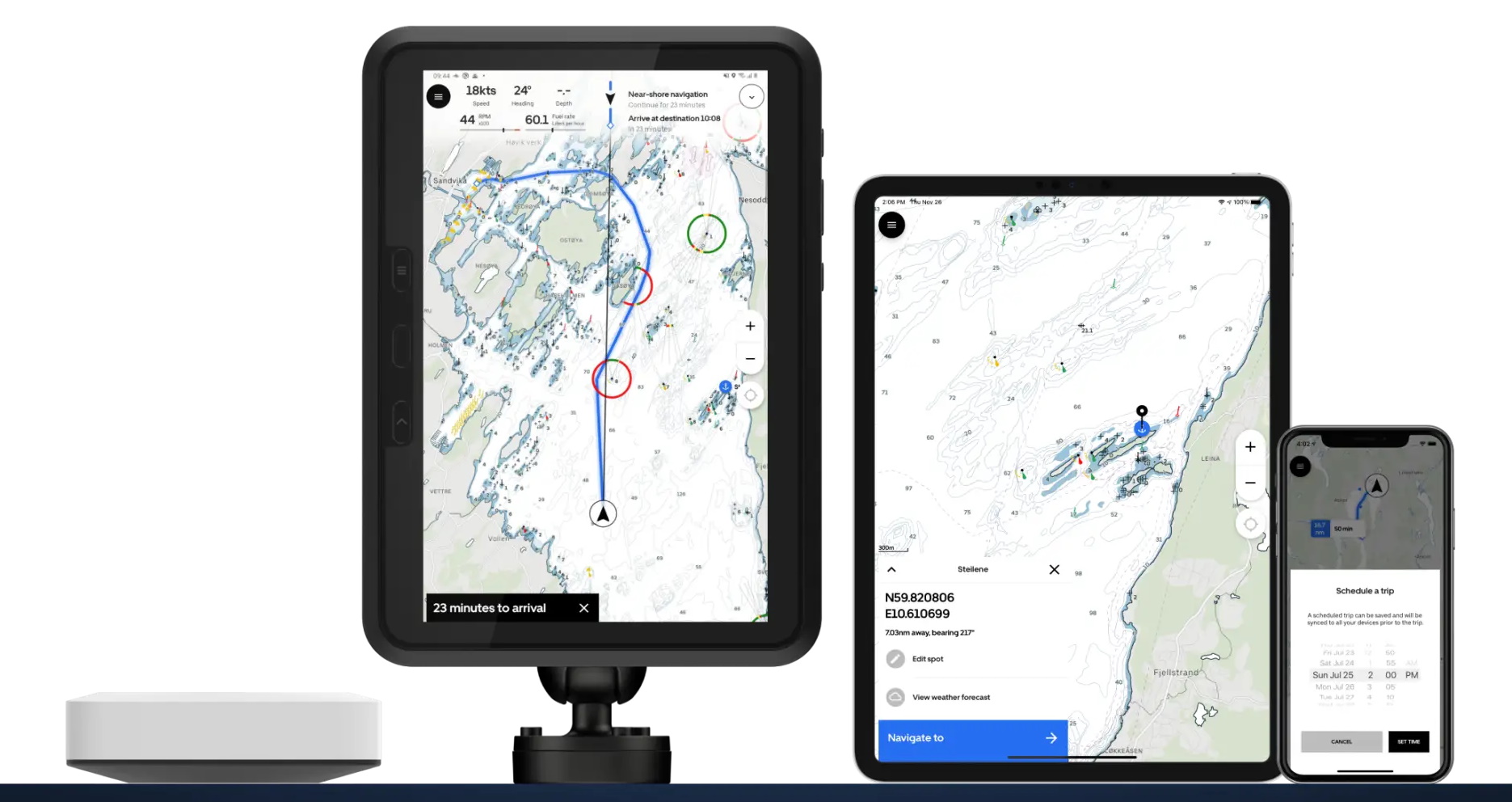 “We can build new services that chart plotters can’t even dream of including,” said Sevillano. “With the latest tide report and wind, or if there’s a commercial ship going in your way, we can update your range and route. We do updates every week with new features and bug fixes. We can iterate and adapt to user feedback faster than anyone else.”

These improvements to the most central system of the boat mean the company has ambitions for coming years beyond simply replacing the ageing gadgets at the helm.

Information collected from the boat itself is also used to update the maps in near real time — depending on what your craft is monitoring, it could be used for alerting others or authorities, for example if you encounter major waves or dangerous levels of chemicals, or detect an obstacle where none is recorded. “The Waze of the seas,” they suggested. “Our goal is to become the marine data company. The opportunities for boaters, industries related to the sea, and society are immense.”

Being flexible about the placement and features means they hope to integrate directly with boats, becoming the built-in OS for new models. That’s especially important for the up-and-coming category of electric boats, which sort of by definition buck the old traditions and tend to attract tech-savvy early adopters.

“We’re seeing people take what works on land taking it to sea. They all have the same challenge though, the biggest problem is range anxiety — and it’s even worse on the water,” said Fallro. “We’ve been talking to a lot of these manufacturers and we’re finding that building a boat is hard but building that navigation experience is even harder.”

Whether that’s entirely true probably depends on your boat-building expertise, but it’s certainly the case that figuring out an electric boat’s effective range is a devilishly difficult problem. Even after building a new boat from starting principles and advanced physical simulations to be efficient and predictable, such as Zin Boats did, the laws of physics and how watercraft work mean even the best estimate has to be completely revised every few seconds.

“Figuring out range at sea is very hard, and we think we’re one of the best out there. So we want to provide boat manufacturers a software stack with integrated navigation that helps them solve the range anxiety problem their users have,” said Fallro.

Indeed, it seems likely that prospective purchasers of such a craft would be more tempted to close the deal if they knew there was a modern and responsive OS that not only accurately tracked range but provided easy, real-time access to potential charge points and other resources. Sure, you could use your phone — and many do these days because the old chart plotters attached to their boats are so limited. But the point is that with Orca you won’t be tempted to.

The full device combo of computing core, mount, and tablet costs €1,449, with the core alone selling for €449, with a considerable discount for early bird pre-orders. (For people buying new boats, these numbers may as well be rounding errors.)

Fallro said Orca is operating with funding (of an unspecified amount) from Atomico and Nordic VC firm Skyfall Ventures, as well as angel investors including Kahoot co-founder Johan Brand. The company has its work cut out for it simply in fulfilling the orders it has collected (they are doing a brisk trade, Fallro intimated) before moving on to adding features and updating regularly as promised.