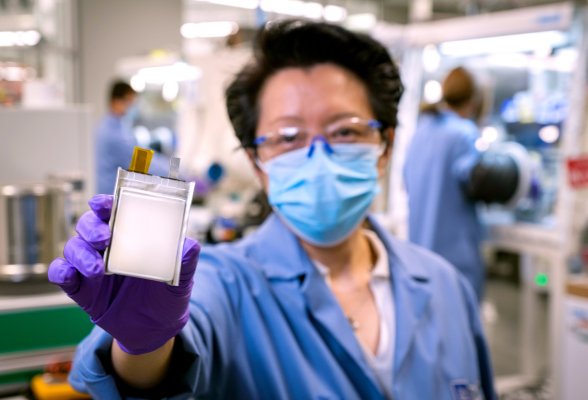 GM’s venture arm invested in battery startup SolidEnergy Systems five years ago. Now, GM is tapping the MIT spinout to help it pack more energy into its batteries, the latest in a string of moves by the automaker aimed at accelerating its shift to electric vehicles.

GM president Mark Reuss, who announced the partnership Thursday at a Washington Post Live conference, said the work with SolidEnergy Systems to improve the energy density of lithium-ion batteries will hopefully drive mass adoption of EVs. As part of the agreement, the two companies plan to build a prototyping facility in Woburn, Massachusetts, aiming to have a high-capacity, pre-production battery by 2023.

SolidEnergy Systems, or SES, has developed an “anode-free” lithium metal battery that improves overall life. According to MIT, material advances in SES’s batteries make them twice as energy-dense while maintaining safety comparable to the lithium-ion batteries used in today’s smartphones, EVs, wearables, drones and other devices. With less weight and more space from a smaller battery pack, vehicles could become more lightweight or have more room for additional technology.

That technology, combined with GM’s own IP, could give the automaker with a competitive edge over Tesla, the automaker with the cheapest lithium battery cells and EV battery packs, according to a new report from Cairn Energy Research Advisors.

GM has grand ambitions for EVs. The company plans to introduce 30 EVs globally by 2025 and sell only EVs by 2035.

GM’s announcement comes one year after the company revealed its Ultium battery platform— the batteries, cells, modules, drive units and power electronics that are the heart of its EV strategy. The Ultium platform that will be used in a broad range of EVs across its Cadillac, Buick, Chevrolet and GMC brands, as well as the Cruise Origin autonomous shuttle that was revealed in January 2020. The all-electric GMC Hummer, which should go into production at the end of the year, will be the first car to be built with the first-generation Ultium batteries.

Reuss also discussed breakthroughs with GM’s next-generation of Ultium batteries. He didn’t provide specifics, but GM aims to push performance while slashing costs. By mid decade, the company wants to increase the energy density twofold and reduce the cost of the batteries by 60%, and they’re hoping the partnership with SES will help them get there.

“Affordability and range are two major barriers to mass EV adoption,” said Reuss. “With this next-generation Ultium chemistry, we believe we’re on the cusp of a once-in-a-generation improvement in energy density and cost. There’s even more room to improve in both categories, and we intend to innovate faster than any other company in this space.”

This isn’t GM’s only venture into the world of battery development. The company invested $3.2 million in solid-state battery company Sakti3 back in 2010, and is currently in talks to construct a second large battery factory in the United States.