Roblox went public yesterday after seeing tremendous growth in 2020, and that’s not just good news for the company’s employees and investors — there are also startups like Gamefam hoping to take advantage of the platform’s success.

Roblox has a whole ecosystem of millions of developers and creators building on its game platform, and some are banding together to create their own teams and studios. (We profiled several of those teams earlier this year in an article about the company’s creator accelerator.) But Gamefam founder and CEO Joe Ferencz said his startup is “the first and only fully-dedicated, professional game publishing company on Roblox.”

Founded in 2019, Gamefan currently has 37 full-time employees and eight live games, including Ultimate Driving and Hot Wheels Open World, and Ferencz said there are another 10 in development. Collectively, those games are seeing 48 million monthly visitors and generating six figures in monthly revenue.

Ferencz himself has worked as a manager Ubisoft and Mattel, where he worked on franchises including Hot Wheels, and where he recalled seeing the emergence free-to-play mobile gaming: “I said to myself, ‘The next time there’s this big platform shift, I want to be a part of this.’” The rise of Roblox and user-created games provided him with that opportunity. 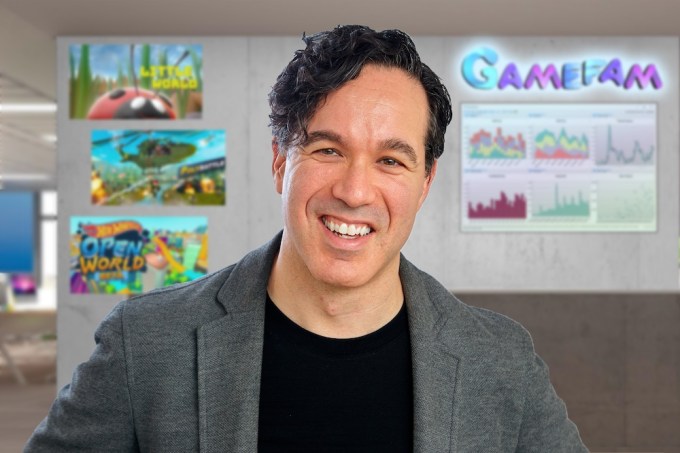 At the same time, Ferencz said he was excited about the opportunities that Roblox provides to escape from the “orthodoxies” of free-to-play gaming, where the economics often drive game design decisions.

“Roblox truly is the metaverse for this younger generation,” he argued. “What they are finding here is something that transcends gaming, it’s human co-experience. What that means is that each game needs to have a very distinctive and attractive immersion to it in way that mobile free-to-play doesn’t.”

Of course, part of Roblox’s appeal is the fact that individual creators don’t need to work with large teams or publishers, but Ferencz said, “Superstar developers and creators are thinking about bigger and bigger games, the sophistication is really evolving at a rapid pace.” That, in turn, means bigger teams, and “when you have bigger teams, you have more process, you need to know how to structure high-performing teams and drive positive teamwork between people.”

“As the business gets bigger, you need people focused on the business opportunities, dedicated marketing functions, a dedicated live operations team,” he continued. “That’s what we offer.”

Ferencz and Gamefan’s business team have been involved in the Roblox platform for several years now, but he admitted, “Although we get it, we don’t get it exactly the way people who have been playing on it since they were 10 and developing for it since 15 get it … We respect that and lean into that.”

So one of the key elements to the Gamefam approach, he said, is to make sure the creators are driving the game development process.

“We believe that there needs to be a visionary or a team of visionaries on each project, and that they need to decide what is right,” Ferencz said. “There will then be a team around them that is part of a consensus process, that the visionaries are responsible for bringing along for a ride.”

And as he thinks about Gamefam’s future, Ferencz said the company could eventually publish games on other platforms. Don’t expect it to happen anytime soon, though.

“Our focus is UGC gaming, and Roblox is the only place that matters in UGC gaming today,” he said. “We plan to build a huge brand and media business hand-in-hand with the Roblox platform. In the long term, if other platforms become relevant, then course we will be looking to evaluate and expand on those platforms —but the truth is, right now we couldn’t be more all about Roblox.”