Google announced the first Android 12 developer preview last month, commencing the path to this year’s major Android update, due late summer. Now DP2 is out and brings a couple of interesting features.

The Android 12 Developer Preview 1 didn’t offer too much in the way of new consumer features, but rather offers some new back-end API tools to prepare developers for the new cycle. Now available for developers with Pixel phones, the update includes “new tools for building great experiences for users.” From what Google has announced in a blog post from Android VP of Engineering Dave Burke, we know Notifications are getting a major upgrade this year.

Now DP2 has arrived, we’re starting to see some cosmetic changes for Android 12, such as a new one-handed mode, which should provide a little relief for those using larger smartphones. There’s also a new Game Dashboard that makes it easier to upload clips to YouTube and such.

As spotted by 9to5Google‘s deep dive into Android 12 DP2 on Pixel devices, the new one-handed mode can be summoned by swiping down at the bottom of the screen. In that respect, it’s similar to the iPhone’s Reachability feature. It’s turned off by default, but once activated, it can allow phone owners to use their device without stretching their thumbs across increasingly large displays.

One enabled, users will be able to choose whether the feature times out (4, 8, 12 seconds or never) and whether they want to exit the mode when they switch apps. 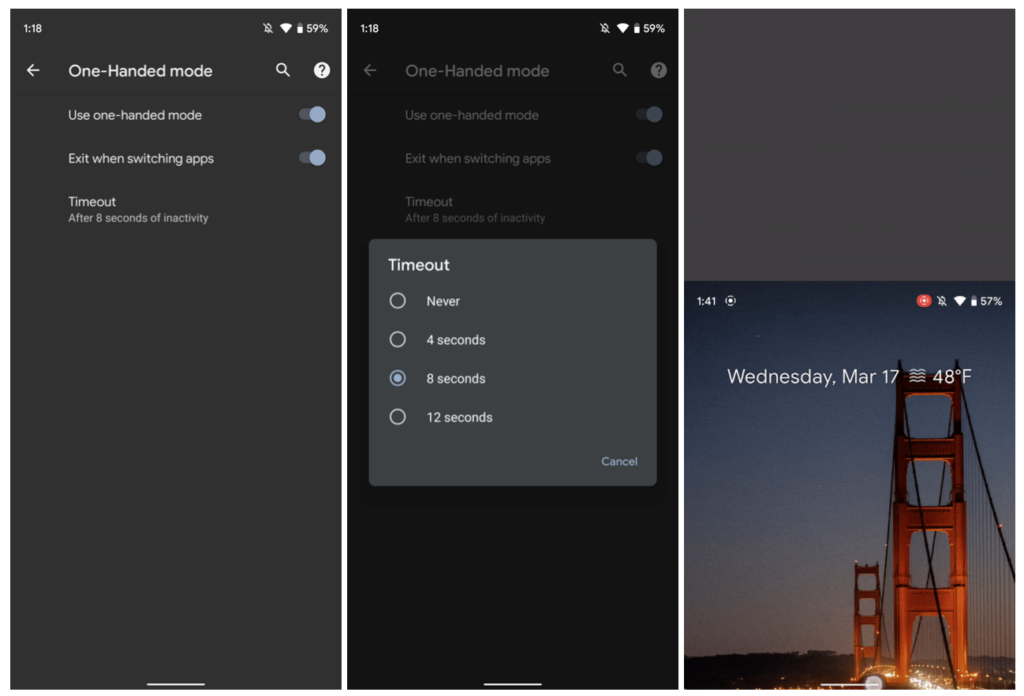 Android 12 DP2 also includes an intriguing new dashboard that’ll enable gamers to record their sessions, stream directly to YouTube, adjust the frame rate in real time, and quickly access to do-not-disturb controls. It doesn’t appear to be fully developed as yet, so this is something we should keep an eye on. It’s unclear whether this feature will be integrated with Stadia or across all Android gaming options.

Burke speaks of new designs that make notifications “more modern, easier to use, and more functional,” in Android 12. There’ll also be optimisations for “transitions and animations across the system to make them more smooth.”

“To keep notifications responsive, Android 12 will block notification trampolines by preventing them from launching their target Activities, and we’re asking developers to migrate away from this pattern,” Burke writes.

Elsewhere in the blog, Burke has announced there’s now a haptic-coupled audio effect in Android 12. “For example, a video calling app could use custom ringtones to identify the caller through haptic feedback, or you could simulate rough terrain in a
racing game.”

Another new feature is dubbed rich content insertion, which will make it easier for users to move images, videos (and other expressive content) around the apps. In Android 12 “we’re introducing a new unified API that lets you accept content from any source: clipboard, keyboard, or drag and drop,” Google says.

There’s also new enhancements for multi-channel audio, support for AVIF images for improved video compression. Gesture navigation is getting a boost too and there’s improved support for tablets, foldable and TVs when it comes to app compatibility.

We won’t see the fruits of this work until future updates. There are further developer previews planned between now and May, while the public beta releases will begin in May around the time of the Google I/O showcase event. Final release is sometime after August.