This puts it in direct competition with the Nvidia RTX 3070, which targets the same market and is the only GPU we tested last year to achieve a perfect 5/5 score.

Here to make sure you pick the right card for your specific build we’ve broken down how the two graphics cards compare, including my real-world experience using and benchmarking them.

The base edition of the RX 6700 is set to retail for $479, while the RX 3070 has a $479 RRP. However, both prices are fairly meaningless at the moment as, due to supply chain issues caused by the global pandemic, there’s a global shortage of GPUs.

That means you’re currently unlikely to be in a position to pick between the two. It’ll more be a case of “grab whatever you can” and jump at the chance to get either the moment you see one that’s not being price gouged by a scalper.

Specs and features – The numbers don’t tell the full story

Placing the two graphics cards side by side, they both feature markedly different designs, despite using twin-fan cooling systems.

The AMD RX 6700 XT is shorter, making it more appropriate for mini ATX case builds. It also has a more regular eight and six pin power connector. The RTX 3070 uses a proprietary connection, though an adapter is included in the box. Things get even more complex under the hood, as both GPUs are built on very different architectures, each of which come with a few atypical features.

The RX 6700 XT is built on AMD’s latest RDNA 2 architecture. This is the same one seen in the PS5 and Xbox Series X games consoles. It’s also the first from AMD to offer ray tracing. This is a graphical technology Nvidia made mainstream in its previous generation RTX 20-series GPUs that lets games render more realistic light effects. 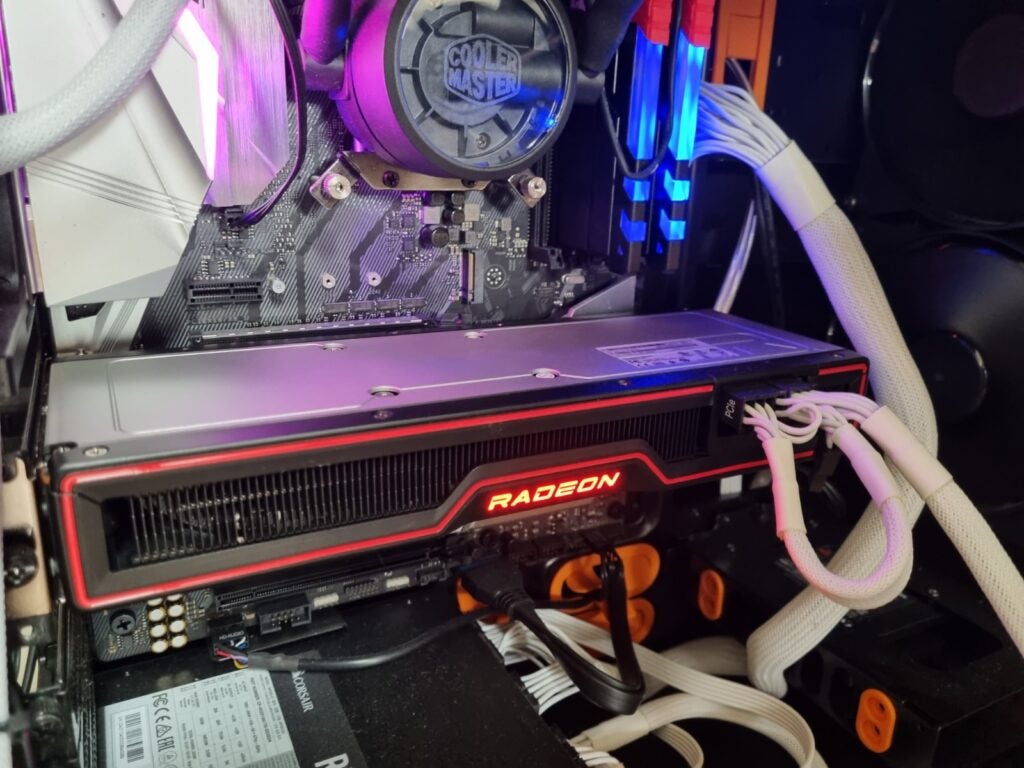 The biggest perks of the architecture are its Infinity Cache and Smart Access Memory features. Infinity Cache is a clever feature that lets RDNA 2 cards store some of the data required to run games in the component’s VRAM, removing the need to reload it each time and thus improving efficiency and performance.

Smart Access Memory is an even more interesting feature, designed to improve how AMD RDNA 2 GPUs and Ryzen 5000-family CPUs work together. It gives the CPU direct access to the GPU memory, letting the parts avoid performance bottlenecks.

At the time of review, I wasn’t able to test the feature as lockdown restrictions meant I didn’t have access to a Ryzen-compatible motherboard, but it’s a compelling idea. Nvidia offers a similar feature in the form of ‘Resizable BAR’, but has limited game support at the time of writing. 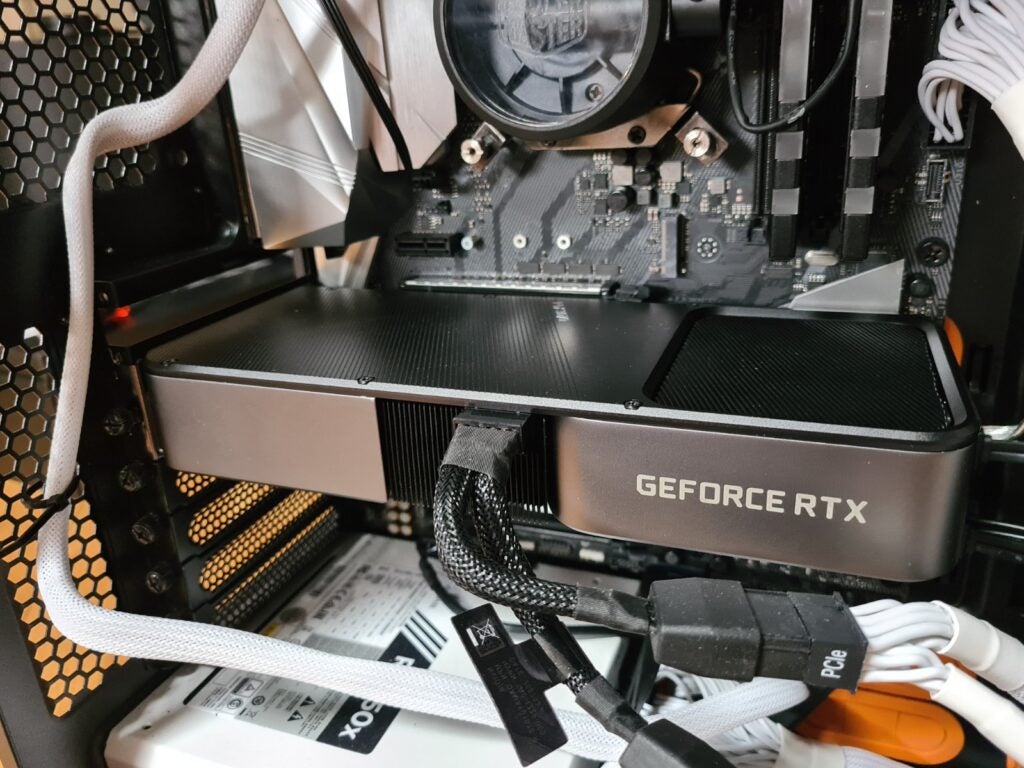 Meanwhile, the RTX 3070 is built using Nvidia’s Ampere architecture. This is the second architecture from Nvidia to support ray tracing. Its primary differentiator is its cutting edge DLSS (Deep Learning Super Sampling) technology. This is an Nvidia RTX feature that uses artificial intelligence to help the card predict what it needs to render, resulting in a more efficient performance with a boosted frame rate. We’ve found it to be an essential feature if you want to play games with ray tracing activated at high resolutions.

AMD doesn’t currently have its own version of the tech, though it has confirmed plans to launch a rival to DLSS at an unspecified point later this year.

The differing feature sets are a key reason the two cards specs don’t paint a full picture of their performance, even though at first glance the RX 6700 XT has a lead when it comes to VRAM and clock speeds. You can see a rough breakdown of the two cards key specs in the table below.

Benchmarks – It’s all about the ray tracing performance

Despite having a lead on clock speeds and VRAM, when I tested the two cards the results were far closer than you’d expect. I benchmarked both cards in a test rig with the below specs:

The results were close with ray tracing turned off, with both cards offering blisteringly fast post-60fps speeds in 1440p and 1080p. You can see a breakdown of how they performed in the diagrams below: 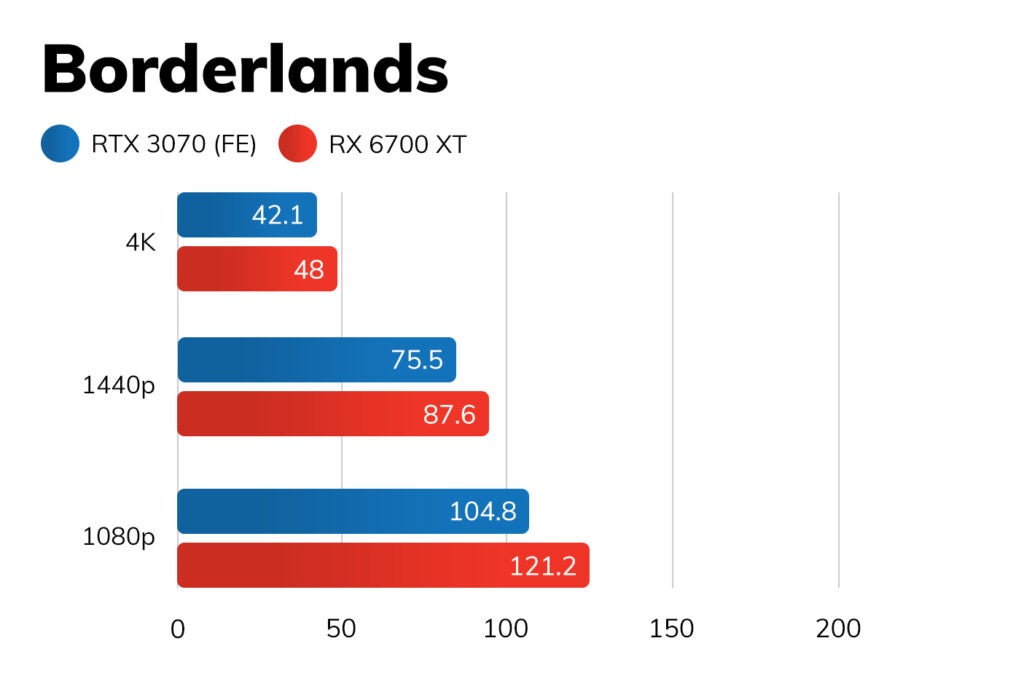 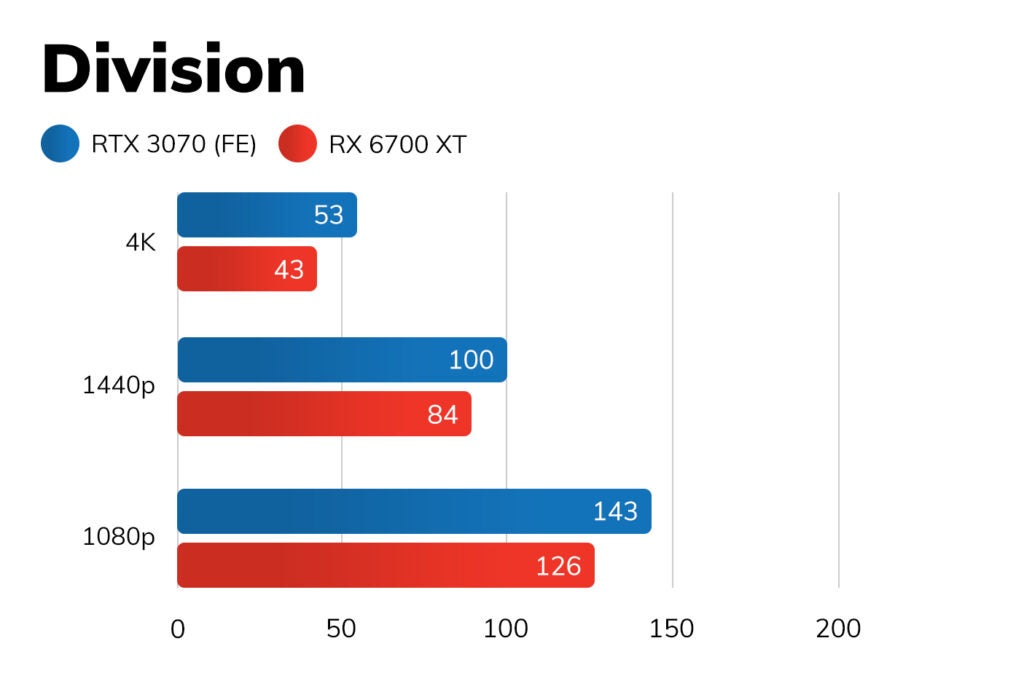 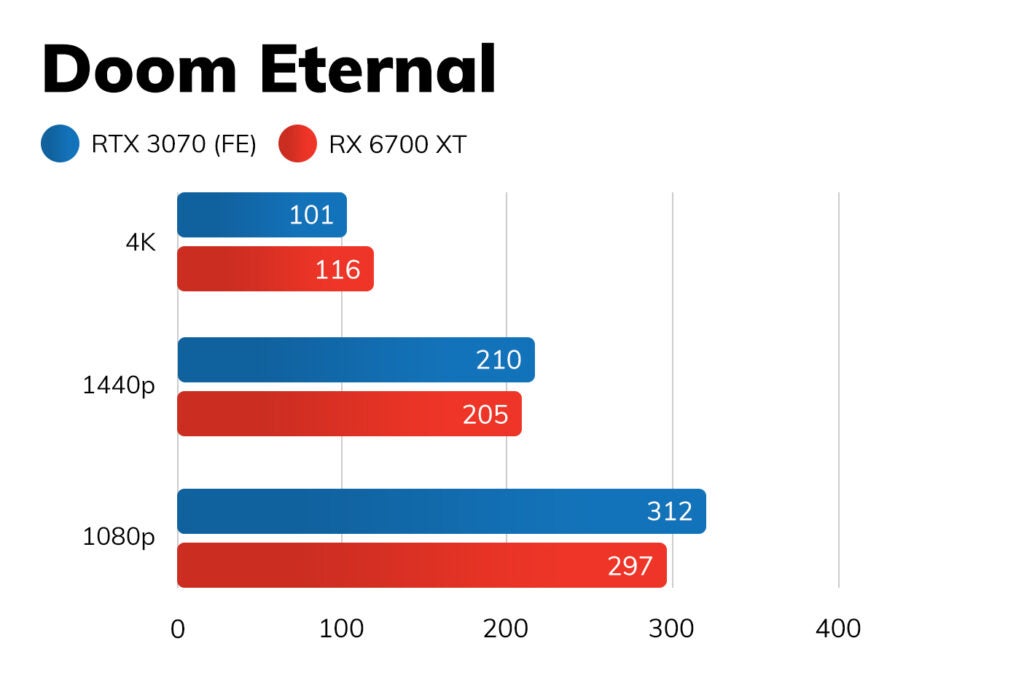 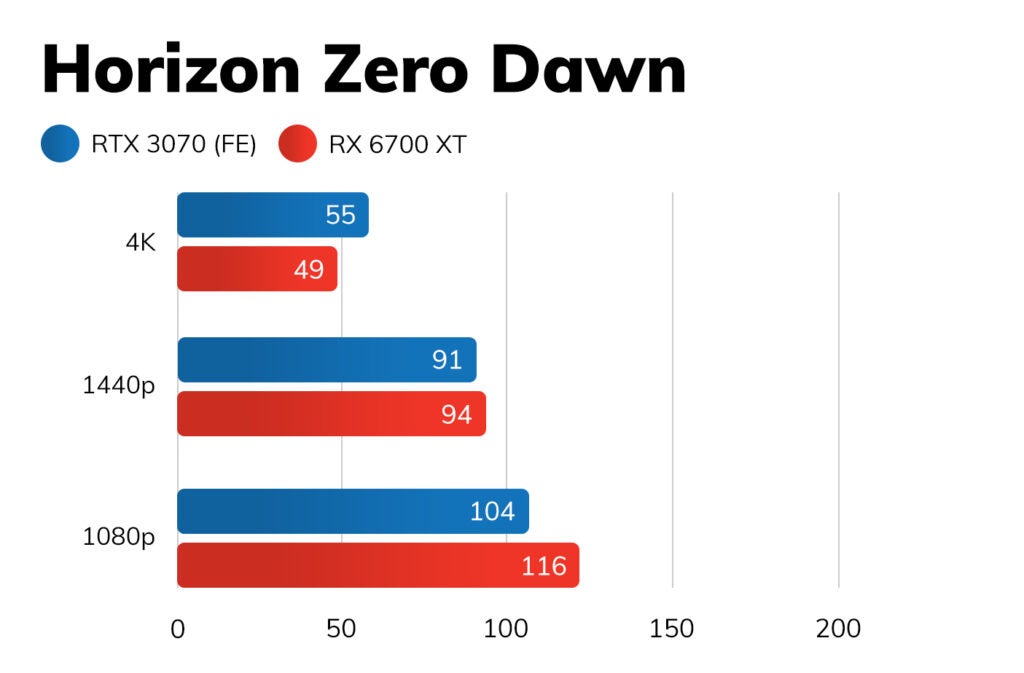 However, when you add ray tracing to the mix, the Nvidia RTX 3070 is the very clear winner when it comes to performance. Control is considered one of the best examples of ray tracing. It’s a beautiful game full of advanced lighting effects and reflective surfaces that really stress tests a GPU. It doesn’t have an internal benchmark, so I gauged performance by taking an average frame rate while running through a preselected section of the game.

Here you can see the difference DLSS makes. In every resolution, the RTX 3070 absolutely destroyed the RX 6700 when it came to ray tracing performance. 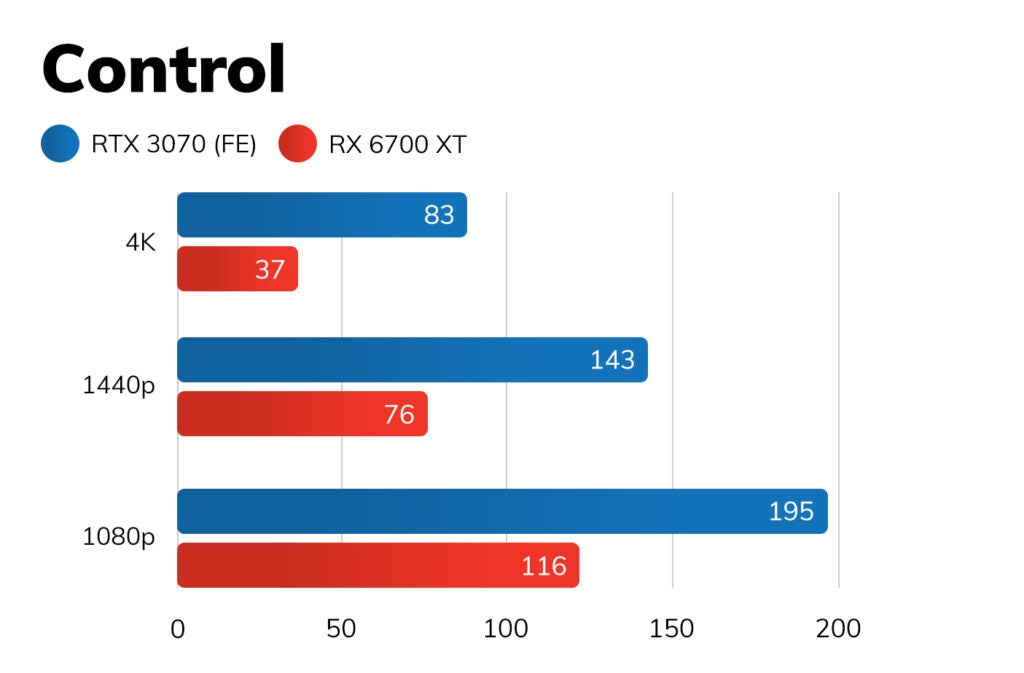 Without DLSS there’s no denying the RTX 3070 is the better option than the RX 6700 XT for any gamer that wants to play games with ray tracing.

However, the AMD RX 6700 XT is still a very capable card, offering solid performance across the board with the feature turned off, meaning it is still one of the best GPUs on the market.