Amazon has updated its 10-inch and Kids Edition tablets for 2021. There’s quite a lot to take in here, so here’s everything you need to know about these new budget tablets for all ages.

All of these tablets are on the cheaper end of the scale and are available to order now, with shipping commencing May 25. We’ve recommended Fire tablets before and many of them have sat in our best tablet round-up.

We’ll bring you full reviews of all these tablets when we’ve spent time with them. For now, here are all the specs and details you need to know about.

Amazon’s base 10-inch tablet has received its yearly update, with a design that’s slimmer, lighter and has more uniform bezels than before. It does look slightly more modern than before, but still with that distinct Amazon look.

Inside you’ll find 50% more RAM than the previous model at 3GB, an unnamed octa-core processor and either 32GB or 64GB of internal storage. If you want to store more on the device you can add up to a 1TB Micro SD card. Amazon has added Dolby Atmos audio (how well this will work on such a cheap device remains to be seen) and claims you’ll get 12 hours of juice from the battery.

Amazon has said the 10.1-inch 1080p display is 10% brighter than the outgoing model and it now has a strengthened glass over the top. These were already fairly durable tablets so this should help increase this further.

There has been a clear focus with these upgraded tablets to make them more productive. The updated Fire OS lets you have two apps open side-by-side, though it seems apps need to be updated for this to work. An example Amazon gives is having Prime Video and Facebook Messenger visible at the same time. There is also deeper Microsoft 356 integration and a keyboard add-on available which you can see pictured below. 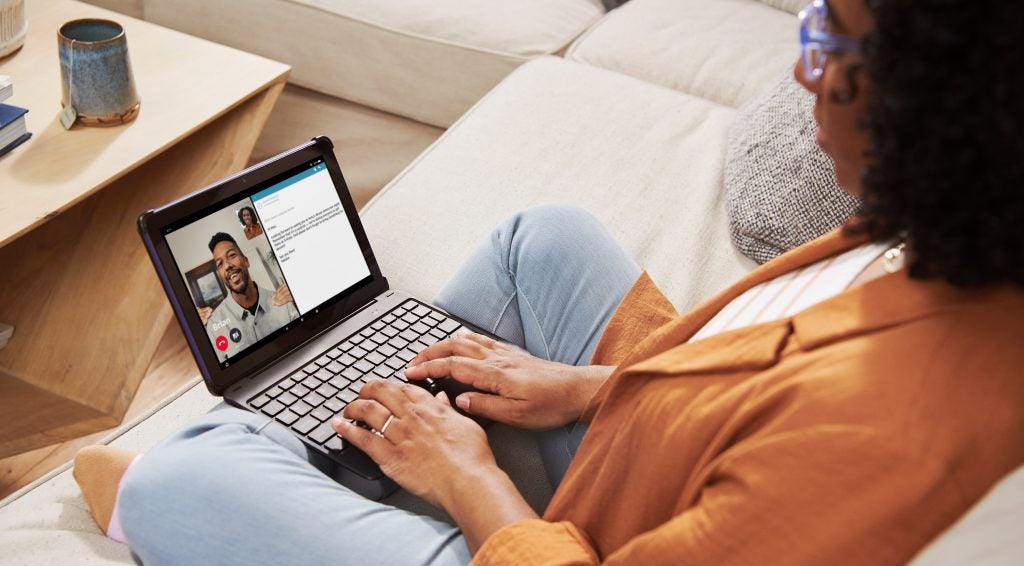 The Plus version has all the features of the regular 10 model, but it ups the RAM to 4GB and adds in a slightly different soft touch, slate-coloured body.

Like the previous Plus model, it also has Qi support for wireless charging. Amazon is selling a dock made by Anker to pair with the tablet, but this will be sold separately.

Amazon has also announced a completely new range of tablets aimed at children, with this Kids Pro line. Pro seems an odd term to attach to these tablets, but they do at least seem like nice upgrades. The Fire Kids Pro comes in three sizes (7-inch, 8-inch and 10-inch) and they all have a built-in kickstand which is a nice touch we would have liked to see on the other models. 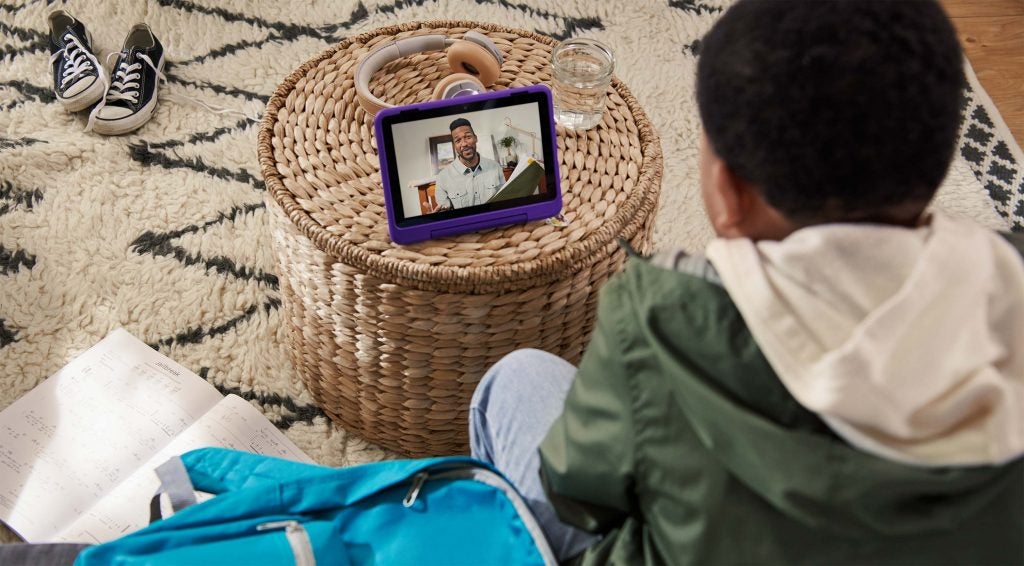 Amazon has tweaked the OS here too, saying, “The home screen theme looks and feels more like a “grown-up” tablet. A new “For You” tab offers a personalised screen of content for easy discovery of new and recommended Amazon Kids+ content.”

All versions of the Kids Pro come with a year of Amazon Kids+, a slim protective case and two year’s of worry-free protection that’ll get you a replacement if the first model gets broken.

Amazon Kids+ includes a mixture of educational and entertainment content including apps, games, Audible books and more. Kids can also request access, from a parent, to apps like Disney+, BBC iPlayer and so on.

Amazon has also announced a Kids Edition of its new 10-inch tablet, with up to 12 hours of battery life, a 10.1-inch HD display and faster performance. The tablet is bundled with a rugged case that’s available in three colours and packs a kickstand.