Apple’s Spring Loaded event is nigh, and though the chances of the AirPods 3 wireless earbuds turning up seem slim, You never quite know with Apple, considering the surprise AirPods Max reveal in late 2020.

So far rumours had suggested an early 2021 release date and improved features for the entry-level true wireless. Considering it’s April, the Spring Loaded event would mark the last opportunity for Apple to bust out a new true wireless.

Whatever the case may be, here’s everything we know about the AirPods 3.

When will the AirPods 3 be released?

The new AirPods are rumoured to go on sale in 2021. When exactly is still a point of contention.

John Prosser said the 3rd-gen model were due in 2020, but that obviously didn’t happen. Prosser, who is not the most reliable source, has offered another potential date for the unveiling – Apple’s March 2021 event. Considering there wasn’t a March event, that didn’t happen either. A trend is establishing itself here…

Some reports have said that there’s been internal discussion within Apple about an early 2021 launch. This would match what was said throughout 2020, with mass production of the earbuds thought to have started in the first-half of 2021.

However, Ming-Chi Kuo – analyst/prognosticator on all things Apple – has indicated the the AirPods 3 wont’ be ready to be unveiled in early 2021. Instead, they’ll going into mass production in Q3 2021. If true, that would put the earbuds just ahead of the AirPods Pro 2 in the production schedule, and possibly line them up for the next iPhone launch.

There’s been more ‘confirmation’ of a release later in the year. 9t05Mac reported that an anonymous leaker with proven record on Chinese social website Weibo said the “AirPods 2 will not die”. It looks like the AirPods (2019) version will be here for a little while longer.

How much will the AirPods 3 cost?

The 2nd-gen AirPods (with the wireless case) were £199/$199. We expect the AirPods 3rd gen to fetch a similar price, with the 2nd-gen either removed from sale or knocked down to become the entry level offering.

This is a pure guess on our part. It’s our feeling Apple wouldn’t want to rock the boat for what’s become a very popular product by upping the price.

According to Ming-Chi Kuo, the AirPods 3 could boast a different design. If true, it’d be biggest redesign since the true wireless AirPod range first went on sale.

Kuo believes that the AirPods 3 will have a similar form factor to the AirPods Pro, and it’s a claim backed up by Bloomberg.

A leak in the early months of 2021 revealed a new design. Spotted by MacRumors, the render concept had ear-tips attached, with the suggestion they could be attached or detached. That sounds rather strange to us.

However, another image surfaced on Japanese website 52audio. It’s of an earbud that looks similar-ish to the AirPods Pro, and that would indicate that both Kuo and Bloomberg are on the right track.

Another image has since popped up for the third different interpretation of an AirPod. From the bulbous housing and what looks like a slightly shorter stem, what’s missing is the lack of an ear-tip. Both LeaksApplePro and Gizmochina have uncovered similar looking renders. 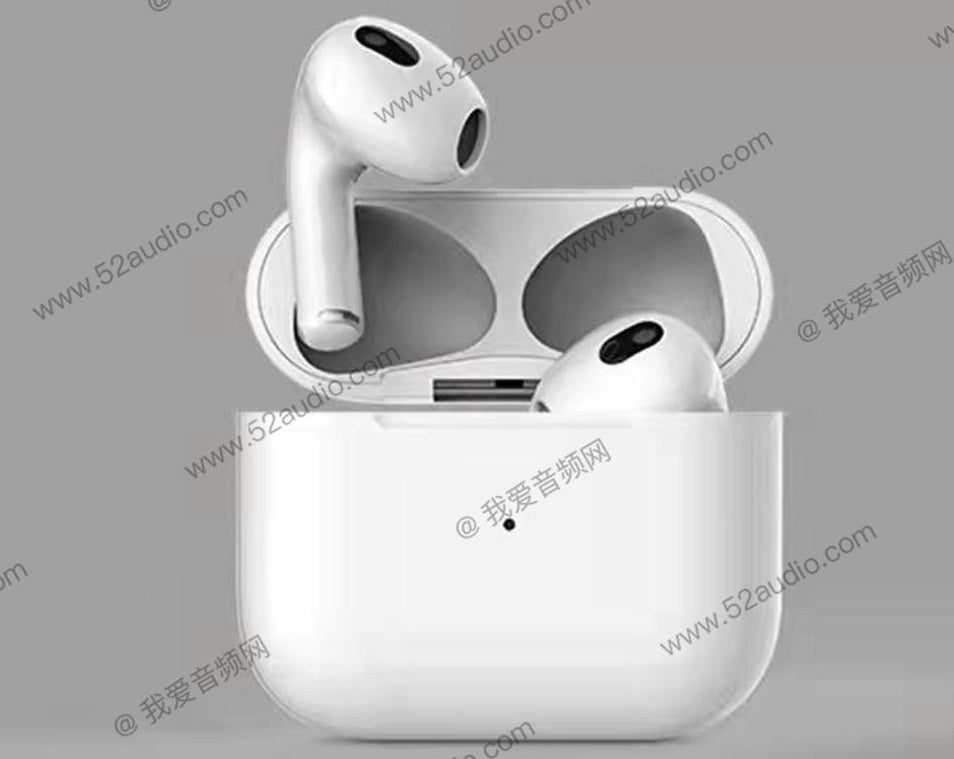 The charging case looks to have been tweaked – it’s wider and slightly curvier. That gives us hope the total battery life could finally be extended beyond the current 24 hours. And what about colours? It’s been a bugbear of ours that Apple only ships the AirPods out in a glossy white finish – not great considering it’s easy for dirt to show up. With the AirPods Max available in several different colours, could the same beckon for the AirPods 3?

What features will the AirPods 3 have?

According to Ming-Chi Kuo, as well as adopting the Pro’s design, the AirPods 3 will include the ANC earbud’s SiP technology. SiP stands for system-in-package chip solution, and this could reduce the amount of space the circuit componentry takes up for more features to be put in. Active noise cancellation is not thought to be coming to this model, however.

Patently Apple noticed a patent about the AirPod’s sensors that gather information about orientation and measurements from the accelerometer. Info from the AirPod will be used in conjunction with an iPhone to supply “the user with coaching and feedback while evaluating user performance of a head movement routine or other exercise routine.” A scenario for this would be striking a yoga pose or training in a gym.

We’ve been hearing about features such as ambient light sensors that could provide biometric feedback. This would also lead into the health-related features circulating around the AirPods for the past few years.

Battery life is another area that could receive an upgrade. Other rumoured features include a pressure relieving system designed to reduced discomfort over extended listening sessions, and a new audio test function to determine whether the quality of the earbuds’ sound requires adjusting. The feature was leaked by Fudge, and the image below seems to depict a new phone holder with an attachment for the AirPods pointed towards the iPhone microphone. From there it can assess whether there’s an issue with the AirPods’s audio quality.